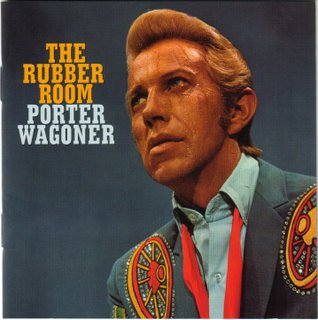 PORTER WAGONER - The Rubber Room CD (Omni Recording Corporation)
A couple of things you should know here... Firstly, I wrote a few paragraphs the other day reappraising the recorded works of Slint, saved it and have now abandoned it for the time being. Who gives a fuck about Slint in this day and age? You only need to know this: their first album was an OK-ish work-in-progress effort which, in hindsight, sounds like a zillion other records from the era; their Spiderland LP and posthumous self-titled EP still sound fantastic and like no other band before or since; they inspired a gazillion douchebags to pick up instruments and imitate their moves with a slow/loud/quiet schtick and none of them quite matched it. Australia had a glut of such bands throughout the mid '90s, as I'm guessing your country/city/town did, too, and thankfully not too many of them are still actively recording. Case closed.

Secondly, I'd like to urge you to check out this Porter Wagoner CD. I'll come clean about this CD, since I've recently been informed that I do indeed have an Australian readership (for whatever reason I figured no-one from this great land even knew about this blog). The confession: it is my day job to sell this CD to stores. That is what I do for a living, and the company I work for pays me well. There, it's been said. I have, over the last 3 or more years, written about many such releases on labels like Smithsonian Folkways, Yazoo, Revenant, Trojan, Water, etc. Never take such reviews as being part of a press junket. I simply write about the music which engages me, excites me and makes me want to tell the world about them. Fact is, 95% of the music I'm exposed to is the stuff I have to sell; there's only so much room in this head of mine to absorb this thing called music, and it's mostly used up by the time I consider actively going to record stores to search out something new. Glad that's out the way...

Omni is a terrific new-ish label owned and operated by local electronic/experimental/soundtrack dude of some repute, David Thrussell. It's a new imprint designed for him to indulge his love of weird and/or forgotten country/singer-songwriter music of yesteryear and give it the deluxe reissue treatment. So far his roster has been so spot on I'm tempted to name it as one of my favourite new labels of the last 12 months. Only 6 releases thus far, but they're all worth your time and trouble: Henson Cargill, Jimmy Driftwood, Jack Blanchard & Misty Morgan, Bobby Bare, John D. Loudermilk and Mr. Wagoner.

The cover and title is a good indication of the musical direction of the CD: anxious, eccentric, surreal, corny, earnest and perhaps affected by too much booze and drugs. Wagoner was big news in country music in the '50s and '60s. He had a few huge hits in the '50s w/ his tunes - a strange mix of "authentic" Hank-derived boogie and showbiz-tinted dross - though it was his TV music-variety show in the '60s which really made him a star. Later on he boosted Dolly Parton's career into the lofty heights which it still enjoys and even appeared in Clint Eastwood's 1981 flick, Honkytonk Man, though to cut a long story short, he's essentially been missing in action for a good 30 years now.

The Rubber Room curates his best material from 1966-'77 and, whilst it took a few listens to sink in, is now flying high as one of my favourite reissue releases of 2006. If you're a country purist (do you know any?) who simply wants the grit w/out the glamour, then look elsewhere. His best material here, such as the truly demented title track (w/ reverbed vocals as he hollers "the rubber-r-r-r room-m-m"), "George Leroy Chickashea" (the story of a man, part white, part black, part Indian, hence the make-up of his name), "Shopworn" (a great metaphor for enroaching middle age) and "Out Of The Silence (Came A Song)" (more loneliness and despair) possess a piercing honesty which, though at first they may make you chuckle w/ their cornball kitschiness, repeated listens bring to light the absolute gut-level honesty and sense of personal expression these songs possess. I won't attempt the longest bow-draw in written history and hail this as street-level proto-punk, though I will state that, beneath the bad jumpsuits and hilarious album covers (featured in the booklet), Porter Wagoner was a pretty right-on confessional singer-songwriter w/ a bizarre and brilliant lyrical cache, and with no bow being drawn whatsoever, if you're as terminally obsessed w/ Scott Walker's first four LPs as I am (the closest musical/lyrical comparison I can orbit here), then The Rubber Room may just prove to be the musical revelation of 2006.

1) THURSTON MOORE IS OK BY ME. Why? Because he's personally picked the roster for what may just prove to be the music festival of the goddamn century. Dig the line-up for the Nightmare Before Christmas here. Stooges, MC5 (OK, possibly not so exciting in the year 2006), Sun City Girls, Negative Approach(!!!), Melvins, Nurse With Wound, Flipper, Dead C., The Haters (sheez, I used to love those guys) and much more. If you can book a ticket, do it now.
2) ARIA AWARDS. If you speak in a funny accent you may not know what the ARIA Awards are. They are, in essence, the Australian Grammys. Yeah, that good. One piece of good news came in last night, drowning in a sea of misery: The Necks won Best Jazz Album of 2006 for their Chemist CD. Hooray for them, seriously.
3) R.I.P. IAN RILEN. X front dude and all-round rock good-guy, Ian Rilen, passed away this morning from cancer. It was a long time coming and not exactly a shock since it was widely known, due to various recent benefits, that his health was in dire straits, though his musical output, if only for the first two X LPs (and the Live At The Civic release on Dropkick - well worth getting), is well worth paying tribute to. It's a shameful confession, but in all the years I loved X - and that's 20 - I only ever saw them once. That was January 1999 at the Greyhound Hotel when they played a headline extravaganza on a stinking hot night. The crowd was so drunk, so raucous, so hot and so pumped up for the headline act - and you can put me under all 3 banners, too - that the entire venue completely erupted when they crashed into their set of classic, older songs. It still stands as the only gig I have ever attended where I actually, literally, swung from the rafters of the venue. A-fuckin'-men to that!