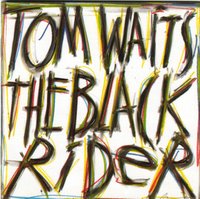 TOM WAITS - Black Rider CD (Island/1993)
If you're reading this and enjoy the kinda music I do - an eclectic mix of the weird, wonderful, beautiful and brutal - there's no earthly reason why you shouldn't like this CD. That is, of course, unless you happen to really dislike Tom Waits. He is, after all, a man who divides opinions. I myself used to dislike the man w/ a lukewarm intensity. To me, he summed up middle-brow contrived weirdness of which I wanted no part of. I'd leave that to the Primus fans. Naturally, I held this opinion when I had never really ever sat down and listened to the guy's music. I'd encountered the man's '70s piano balladry and found it bearable - and somewhat admired his desire to be a modern-day Noel Coward/Hoagy Carmichael in a sea of '70s denim - but ultimately they were friends' records, not mine. And never would be.

Then back in '99 a work colleague put on his Swordfishtrombones CD from 1983 - the album which saw his musical direction take a swift left turn - and when it finished I begrudgingly told my fellow listener that I, ahem, thought it was "pretty damn good". A few years later I was subjected to Waits again, this time his 1986 recording, Frank's Wild Years. Again, I was forced to admit it didn't blow. Next thing you knew, I went out and bought Swordfishtrombones, then Frank's Wild Years... and then it was all on: Mule Variations, Bone Machine, Rain Dogs, Black Rider and the then recently-released Alice and Blood Money albums. I was then ready to rewrite my own history: I stood as a proud fan of the man. You can either embrace the theatricality and take it as That Is Tom Waits Is, or you can reject it. For myself, the music in itself is so damn good that no matter how affected you may take the "weirdness" to be (and I don't think there's anything "affected" about it: Waits is flat-out a pretty eccentric guy), there's no doubting how intriguing the mix of sounds he puts together is. Take, for example, The Black Rider.

This is the soundtrack for the operetta of the same name, some of which is written is collaboration w/ William S. Burroughs (who also appears here) and Robert Wilson. As an "album" in and of itself, it probably isn't entirely successful, though as a series of musical sketches it's excellent to listen to in short bytes. Waits, much like Lou Reed, could probably be accused of being only as good as those with whom he surrounds himself with. With Lou it's Cale, Tucker, Quine or even Bowie. With Waits, as long as Ralph Carney or Marc Ribot or even his wife Kathleen Brennan (the one person who truly inspired his 1983 musical detour) are nearby, there's going to be something worth listening to. Well, there's no Ribot here, though the sheer depth of mixture of sounds present make up for the lack of any spiky guitar jabs.

At the start I remarked "there's no earthly reason why you shouldn't like this CD". I said that because Waits wears his influences on his sleeves like no other. In other words, if you are partial to the sounds of Captain Beefheart, Residents, Carl Stalling, Bernard Hermann, Howlin' Wolf, Ennio Morricone, Moondog, Django Reinhardt, Charley Patton, Eastern European gypsy music and Harry Partch - like Waits is, like I am - then The Black Rider's patchwork of all of the above should appeal. I'll even go out on a limb and state that if you hanker for the percussive clang of Amon Duul 1 or the Godz, then something within The Black Rider will float a boat. This is the wildest, wooliest and most far gone Waits has ever traveled, and it's a really good thing. Unless, of course, if you happen to still really dislike the guy for some reason. I now own and semi-regularly listen to all his '83-and-onwards recordings and can't figure out why you'd hold such a bogus opinion. Either you haven't yet heard all those great records, or you're not listening enough. New triple CD out in November. You can read about it here. Sounds tasty.
Posted by Dave at 6:38 PM