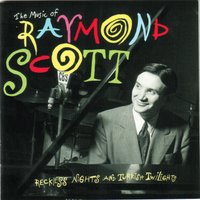 RAYMOND SCOTT - Reckless Nights and Turkish Delights CD (Sony/1992)
One of those CDs I purchased during the dizzying heights of that "Incredibly Strange Music" hubbah of the early/mid '90s, a time and place no one cares to mention much these days. Was it really that embarrassing? I never purchased any tiki art, took up cocktail drinking or bought a leisure suit, so I think I came out relatively unscathed. A handful of Yma Sumac, Carl Stalling, Les Baxter, Arthur Lyman and Martin Denny CDs and LPs and that was it. And this. Forgot I even had the thing until a friend brought up his music in conversation last week. Good thing I didn't flog it off in a cull of yesteryear, coz it's a real goodie, and one which has made for a great driving soundtrack the last few days. You probably know the story already, so does it need explaining? You'll know most of these songs, maybe all of them. You probably grew up hearing them and didn't even know it. Arranger Carl Stalling took pretty much every track featured here - all recorded in the 1930s - and reworked them for Warner Brothers cartoons in the '40s/'50s. I have the relevant Stalling recordings around here somewhere, too, though I much prefer the originals. Stalling's arrangements are brilliant, but way too bombastic and overwhelming to listen to w/out any visuals, whereas Scott's, at least in comparison, are fairly stripped down and easy to digest. If anything, the music featured here sounds like nothing more than eccentric, energetic, cartoonish jazz from a bygone era, and that is by no means an insult. By golly, it sounds like an insult, though, doesn't it? If ya dig your mid period Sun Ra - think Magic City or Atlantis - when the great one was really starting to hit his stride, then this collection of Dada-infused jazz (song titles: "Dinner Music for a Pack of Hungry Cannibals", "War Dance for Wooden Indians", "At An Arabian Houseparty", etc.) is a perfect place to start. Coming around to this a good dozen years after its original purchase, my mind is once again blown.

Scott was also a pioneering electronic composer in the 1950s, much like Robert Moog, and there exists an amazing double CD documenting these recordings. Check it out right here. Better yet, you can head right to Raymond Scott's MySpace page, where you'll notice that his archives' Advisory Board features the unlikely combination of, err, Mark Mothersborough, Leonard Maltin and Henry Rollins. Nice to see Hank so busy w/ other people's music for a change. I hope it stays that way.
Posted by Dave at 11:34 PM