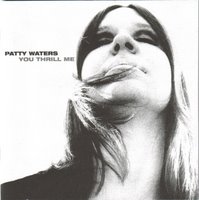 PATTY WATERS - You Thrill Me CD (Water)
Many a year ago, whilst in the thick of a mid-'90s ESP binge, I purchased Patty Waters' Sings LP. Huh? Why all the hoopla? I was expecting gonzoid freakouts of Godz/Fugs/Cromagnonian proportions, but was calmly greeted with the soothing sounds of a pretty female vocalist accompanied by a piano. Just to throw salt into the wound, the lady could really sing, too! I poo-pooed it as a misfire and returned to my Yoko Ono CDs instead. My expectations were amiss, though Patty is not a talent I should've so easily dismissed.

Skip a few years and her College Tour CD, also on ESP, found its way into my hands. In a free-jazz haze at the time, it was right up my alley. Though a mostly quiet affair, it's punctuated w/ bursts of screaming avant vocalese, accompanied by a who's-who of east coast ESP jazzbo all-stars and fit my regular diet of audio torture nicely, thanks. In the year 2004 popped up this rather terrific comp', put together by the good people at Water.

A collection of pre- and post-ESP odds 'n' sods from the lady, culled from her own collection of tapes, it makes a perfect evening of listening for a man coming into his mid '30s who's becoming less and less afraid of admitting his fondness for music of an outstandingly pleasant nature. Fact is, ten years ago this disc would've sent me into a coma, pronto. As it stands, it's a regular spinning wheel which soothes the savage beast. Again, this is fairly minimal indeed: there's not much here which wouldn't fall under the banner of "vocal/piano", though the starkness and warmth of Waters' voice does the trick. The opening track, taken from a Jax Beer Commercial in 1964, is a hoot and works outside of its gimmicky context, and the Billie Holiday (an obvious reference point for Patty, if you must) and Hoagy Carmichael covers round out perfectly a host of originals which, quiet as they seem, just go to show you don't need to scream and shout to grab my attention. Nice package and liner notes by Ghost's Masaki Batoh and the ever-present Byron Coley, too. I might just get a copy of this for my Mum - a self-confessed Nina Simone fan, if you will (which of course is a good thing... and about as cool as my Mum gets by approximately a thousand miles) - and make her the hippest dame in squaresville. She'll thank me.
Posted by Dave at 3:59 AM