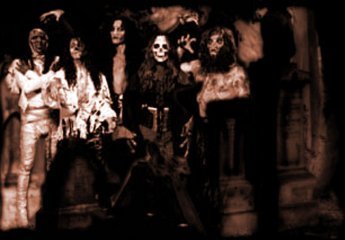 DEATH SS - The Horned God Of The Witches 2LP (Black Widow/Italy)
This is the best discovery I've made of late: Italy's horror-metal "legends", Death SS. Highly regarded in collector-dork circles by various socially-challenged individuals, Death SS have been around since the heady days of 1977. If you want the complete story, with footnotes and broken English intact, please visit their web site. They've split up, reformed and lost members like I change my socks over a near 30-year period, and in their current line-up resemble a middle-aged Sigue Sigue Sputnik, so let's stick to their early days, 'k? This double LP covers their early demo material and is indeed twice as good as the belly-laugh-worthy photos which accompany its swish gatefold sleeve.

You see, Death SS liked to dress up. Not just yer typical rock 'n' roll gear either; rather, they went for the full Hammer House Of Horror get-up: corpsepaint, robes, daggers, fake blood, the whole deal. Kinda like Kiss w/out the glamour. The bassist donned himself in a goddamn mummy's outfit, head to toe. I first read about these guys when none other than Jello Biafra raved about 'em in one of the Incredibly Strange Music volumes RE/Search put out in the early '90s. You can bag Jello and/or the RE/Search posse 'til the cows come home, but I will eternally lay credit at their door for at least awakening me to some great tunes by the likes of Les Baxter, Yma Sumac, Magma, Joe Meek, Scott Walker, Os Mutantes, etc. at the time said volumes were released. But anyway...

This platter arrived in my hands during the week and when I got home that night I placed the needle in the grooves with great caution. Was I about to be seriously burned? Would their outrageous attire and ridiculous song titles add up to a big zilch? Were they indeed nothing more than Record Collector Rock, good to show off but not to listen to? Were they merely an Italian version of Skyhooks or, even worse, Judas Priest? Thankfully, neither. If anything, at least in their early days, Death SS were more like an Italian version of Venom or even the Misfits, with Steve Sylvester's raspy vocals and Paul Chain's fuzz-laden, doomy guitar riffs lending this a proto-Black Metal feel I can get my head around, easy. Not just a record to show off, but one to play, too. Alright!

The two openers, "Terror" and "Zombie" are total uber-energy punk rockers, an urgent combo of early '70s HM a la MC5/Stooges/BOC w/ a down-tuned guitar sludge worthy of a dozen Southern Lord bands. Flip it over to side B and you get "Horrible Eyes", total Master Of Reality rip-off dirge w/ Sylvester's Alice Cooper howls in the chorus, but what's next? "Cursed Mama"! Like the title, love the song. Take this track, whack it on a ltd.-edition purple-wax 7" and tell your friends it features the roadie from the original line-up of, I dunno, the Bunny Brains or the Brainbombs, and wait for the eBay bids to roll in. It is TOTAL ROCK DESTRUCTION. Garbled, distorted vocals, lumbering rhythm section and a wall of guitar noise perched somewhere twixt Flipper and Harry Pussy, suffice to say, it does not sound like a bunch of typical Italian teenagers of the period. Or any period. Killed By Death geeks, take note!

I'm still finding my way through the second disc. From a brief spin, it appears to be up to par. Akarma, Get Back, Earmark, Black Widow: you know these labels well. Between the lot of them they've unearthed just about every "lost gem" of the '60/'70s you'll ever care to hear in a lifetime. I've heard a whole bunch of 'em, and a lot of them, I never care to hear again. This LP belongs in a different basket. You can, if you like, ignore the costumes, time frame and sense of reference for Death SS and simply listen to this double set for what it is: a mother of a collection of lo-fi, basement-dwelling destructo-rock right up there w/ all those other names of the period we love and cherish. I don't mean to get anyone too excited, and I'm not sure I'm even capable of such a thing anyway, but really: Death SS and their monumental double-LP collection of late '70s demos, The Horned God Of The Witches: believe this hype!
Posted by Dave at 5:21 PM