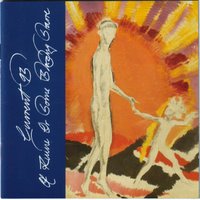 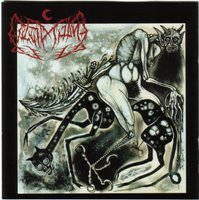 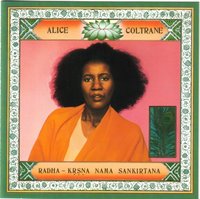 Been away. Been busy. Spent Wednesday night in Sydney for a launch thing. Sydney sucks. Nothing to see, nothing to do, the people are mostly dicks. There is a couple of sweeping statements to get some blood boiling. I'm using hyperbole to make a point, but seriously, why the fuck would anyone with an interest in any sort of music or, day I say, a "counter-cultural" bent to their way of thinking, want to live in such a yuppie hellhole? Beats me.

When I get off my ass and get a spare minute, I really will write something of substance; until then, here's my cop-out list for the next two minutes...

ALICE COLTRANE - Radha-Krsna Nama Sankirtana CD; Transfiguration CD; Transcendence CD; Universal Consciousness CD
Yep, on an AC kick like never before. Much like her compadres Pharoah Sanders and Don Cherry (or even Miles), her music took a wild detour by the dawn of the '70s and dove headfirst into a universe inhabited by avant-garde jazz, ethnic chants, religious hokum and modal rhythms influenced by the sounds of Africa and most notably India. So far as I can tell, everything she did between the years 1968-'77 is worth investigating, including, of course, all of the above.

GLENN BRANCA - Symphony #3 CD; Symphony #5 CD (both Atavistic)
Good to revisit these again. Had a taste of Branca in the late '90s when these were first doing the rounds in a widely-distributed manner, and after re-reading that hilarious interview he did in Forced Exposure many a year back and seeing his battered (yet still suave) mug in Don Letts' woeful Punk: Attitude pic (man, where does one start w/ that trainwreck?) just recently, it's good to know he's still kicking and angry. The music holds up, too.

THE EX - Mudbird Shivers CD (Ex/RecRec/1995)
Some clown at the All Music Guide compared this to Captain Beefheart and P.i.L. Was he listening to the same record I am currently am? I don't see the comparisons. Let me rip out a couple of vaguely less-cool ones which hit the mark slightly more close to home: Fugazi and Sonic Youth. I like both bands; doesn't bother me. Really dig The Ex, too, for that matter. New recording out soon - a collaboration w/ the great Ethiopian sax player Getatchew Mekurya (see Ethiopiques Vol. 14). Should be hot.

MOONDOG - More Moondog/The Story of Moondog CD (Prestige)
The two '50s LPs on one shiny disc. Bongos, poetry, chants and even the occasional bit of brass. The revival is on (apparently), so I guess you'd better hop on. Great background music, and if you're into anything as weird, wonderful and disparate as Jandek, Don Cherry, Yoko Ono, Can or William Burroughs' '60s tape experiments, you'll find something of worth here, though it does get a bit samey and repetitive at times.

LEVIATHAN - Howl Mockery At The Cross CD; Tentacles of Whorror CD (both Moribund/USA); Verrater 2CD (Tumult/USA)
Three hits from the Golden Boy of American Black Metal. Listening to Leviathan - that's one guy: Wrest - separates the wheat from the chaff pretty quick. He is, quite simply, the best practitioner of the genre in America today. For every field of music, there's the groundbreakers and innovators (take your pick: Ornette, Cecil Taylor, Ayler, Bad Brains, Black Flag, Eno, etc.) and those who imitate or at least expand on the given template to good or great effect. Leviathan doesn't really do a whole lot that hasn't already been heard on half-a-dozen terrific early '90s releases by the likes of Darkthrone, Burzum or Immortal discs, but it's done exceptionally well and juices up the proceedings with a couple of weird twists: the occasional burst of fuzzy psych guitar workouts on the Tumult 2CD (which bring F/I's early recordings to mind); the HC/metal riffing (a la Celtic Frost/Melvins) present on Tentacles Of Whorror, and the weird, vaguely Anglo-goth vibe (inc. a Death In June[!!] cover) in the ultra-tinny moments of Howl Mockery... Along w/ Greece's End, Leviathan is perhaps the pinnacle of non-Viking BM.

I went to a rather "respectable" dinner party last night for a friend's 40th birthday and somehow found myself telling a table full of semi-clueless types the entire history of Norwegian Black Metal and GG Allin. I'm not sure how the conversation wound up in that direction (I think I was trying to explain absurdity/extremity in music... yeah, don't ever invite me to one of your dinner parties), but since the people present actually seemed genuinely interested (I wasn't drinking, so you can't trip me up w/ that excuse) in learning about this nonsense, I was on a roll and felt like I bizarrely managed to make at least 10 minutes of sense to everyone there. At the end of my breathless rant one lady remarked that she found it staggering that an obviously intelligent person like myself (aw, shucks) could be a fan of such blatant juvenile stupidity, and wanted to know how I could justify my interest. OK, the answer? How could you not be interested in such things (for the record: I am most certainly not interested in GG Allin, and am embarrassed of my fandom for him as a young man), at least from a perspective of finding it socio-culturally interesting; and secondly, if the music is in fact really good and holds up on its own, then there's a bonus and a reason to actually listen to the music and not simply restrict yourself to books on the subject. And of course, I have never in my life met a BM fan who takes it seriously.

CURRENT 93 - Of Ruine Or Some Blazing Starre CD (Durtro/UK)
1994 album from Tibet and gang, the follow-up to '93's masterpiece, Thunder Perfect Mind, and one which nearly matches its predecessor. Read my review of TPM somewhere else in this blog, change a few words around, and there's my review for this. Line-up: Tibet, Stapleton, Cashmore. On another note: has anyone heard Nurse With Wound's long-rumoured "hip-hop" album? As w/ Neil Young's new "political" disc - another brave move from a risk-taking veteran - I suspect it'll either be the best or worst thing I will hear all year.

ARCHBISHOP KEBAB - Yinferranodge LP (Seldom Fed/UK)
Long-lost LP from this obscure/obscured Scottish outfit which kicked around at the time w/ other faves of mine: Stretchheads, Dawson, Dog Faced Hermans, etc. Got this a month or two ago on eBay for a knickle and it was money well spent. Don't know what was in the air in the hills of bonnie wee Scotland at the time, but AK have taken the same musical template as Dog Faced Hermans and skewed it ever so slightly for reasons unknown. Female vocalist, hyperkinetic rhythms, funky bass, scratchy guitar and a myriad strange instruments at their disposal. That's a recipe for a good time. Play it back to back w/ an early DFH disc and you probably won't be able to tell the difference, though there's no complaints from this quarter.

Rumour of the week, or year, just heard today: Byron Coley was in fact the ghost-writer of the best-selling Motley Crue bio, The Dirt. One man in the loop swears by it. You didn't hear it from me.

New comments box up soon.
Posted by Dave at 12:04 AM No comments: Links to this post 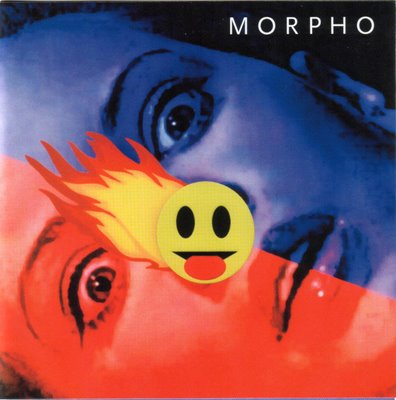 It's been a while. Computer has been on the fritz - it's back up 'n' happenin' again - and I've had a busy Easter weekend. Actually, it's been the weirdest fuggin' Easter weekend on record. Let me put it this way: if you're planning to spend a Saturday night in the middle of nowhere, or in an old butter factory-turned-art gallery out in the hills three-and-a-half hours drive from Melbourne, to catch up w/ a friend of your wife, make sure their psychotic/bipolar/asshole boyfriend (the one you were under the impression said friend had broken up w/ and was out of the picture) isn't going to be hanging around the whole time. He was. I feel like I've just spent a weekend w/ Norman Bates/Martin Bryant/Travis Bickle and Ted Bundy all rolled into one. Chilling... but this isn't the forum to go into it. I still feel rattled. One day I'll look back and laugh, but not yet.

US folkie Marissa Nadler is touring here next month, courtesy of my buddy Dan. I just got my hands on her new-ish (actually, is it a not-no-new recording licensed from Eclipse?) CD on Unstable Ape and it's a beautiful thing. If you come from the land Down Under, you would be a lazy asshole to miss her glorious pipes in the flesh when she plays here.

Dr. Jim over at... Dr. Jim has just released the new CD - actually, the debut CD - from Morpho, a new project featuring local Renaissance Man wiz, Dave Brown and visual artist extraordinaire, David Wadelton. It's the best thing I've heard in a looong time, or at least since that other release a few weeks back which blew me away (was it Roscoe Holcomb? Don Cherry?), and the fact that it was released by a good friend and contains the talent of another good friend means zip. It's a scientific fact. A fake soundtrack of sorts, it must rate as the most accessible slab of sound Brown has leant his name to since the heady, rock 'n' roll days of Dumb & the Ugly. The liner notes mention the likes of John Barry, Dennis Wilson, Goblin, Can, Neu!, Carl Stalling and Booker T. & the MGs. That's a good starting point and reference list for you. Upon hearing this, you will be shocked. Listening to this pisses me off for two reasons: A) I didn't release it; B) being on Dr. Jim's, a fairly low-key label from ol' Melbourne town, and not, say, Tzadik or whoever, you may never get to hear this. Please, don't let hopeless obscurity become of this fine release.

Lexicon Devil has just reissued the absolute last of the F/i rarities, 1989's Paradise Out Here, originally released in a vinyl-only pressing of 300 back in 1989. I think it easily competes w/ 1987's jaw-dropping Why Not Now?... Alan! LP from 1987 as perhaps their finest recorded moment. Swish new packaging, two previously unreleased bonus tracks, please enquire at a record barn near you.

I'll make a concerted effort to write something for real this week, but in the meantime, here is my space-filling Top 10 for the next 15 minutes. Ciao.

1) ROSCOE HOLCOMB - The High Lonesome Sound CD
2) HASIL ADKINS - Out To Hunch CD
3) BRIAN ENO - Before And After Science LP
4) OS MUTANTES - Everything Is Possible CD
5) LEVIATHAN - Tentacles Of Whorror CD
6) CREEDENCE CLEARWATER REVIVAL - Green River LP
7) GRIFTERS - One Sock Missing LP
8) DON CHERRY - Orient 2LP (really, still)
9) CABARET VOLTAIRE - The Voice Of America CD
10) TRUMAN CAPOTE - Handcarved Coffins (watching Capote last night made me dig out this oft-read gem for yet another quick read. Capote claimed it to be a true story; you be the judge of that. It's easily the creepiest story he ever wrote, even more so than the brilliant In Cold Blood: THE GREATEST BOOK EVER WRITTEN! If you've never read Handcarved Coffins, I can only plead and beg...)
Posted by Dave at 3:51 AM No comments: Links to this post

Ever read Steven Blush's book, American Hardcore. I did. You probably did, too. Frankly, I thought it was a dog's breakfast in serious need of a fact-checker and/or competent editor, though now things are really starting to get interesting. There's a documentary film on the subject and, much like the book, I don't care how much they fuck it up... I WANT TO SEE IT! Here's hoping it hits the film festival circuit Down Under in the next 6 months.
Posted by Dave at 3:00 AM No comments: Links to this post
Newer Posts Older Posts Home
Subscribe to: Posts (Atom)