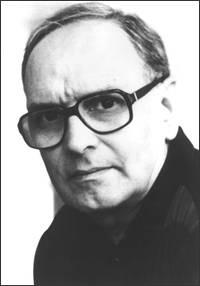 Ahem!... Been busy, you know... that time of year. Maybe I'll get back into this thing once life settles down in mid December. So many good things to talk about. There's the new Ennio Morricone 2CD entitled Crime and Dissonance compiled by the Sun City Girls' Alan Bishop, released on Ipecac, of all labels (whose head honcho, Mike Patton, will never overcome his audio disgraces committed w/ Faith No More and Mr. Bungle, but I get a feeling his heart is in the right places these days). I don't think this is actually out and about yet; I fluked a free copy by accident, but having spun it a good two-dozen times the last week, I'm happy to report this is well worth laying hard moolah down for. Haven't done the Morricone "thing" since the late '90s, though I think I'm about due for a revival, coz the bounty here is a near-Holy Grail for Morricone dorks. And count me in! Including a multitude of tracks from a plethora of unpronounceable Italian flicks from the '60s/'70s, this is the best non-Spaghetti Western mix of The Man's tunes compiled thus far. Ya get the kit, kaboodle and kitchen sink: funkified psychedelia, screeching strings, ooh's and aah's, experimental electronics, Jew's harp serenades and even a track from Gruppo Di Improvvisazione Consonanza (a kind of improv/electro-acoustic outfit Morricone was linked with). Fuckin' A! This is one of the best things you or I will hear all year.

Speaking of weird-ass comps, Jason over at Perfect Sound Forever has done it again. OHM: The Early Gurus of Electronic Music is a beautiful package - 3 CDs and a DVD w/ a swish booklet and plastic slipcase rounding it off (did I mention it was actually co-produced and compiled by Jason?). This was available a couple of years back as a 3CD pack but went out of print as the label, Ellipsis, shut up shop. Now it's back w/ a bone-arse DVD and I'll be gobbling it slowly for a good 6 months. I listened to a LOT of this kinda shit from approx. 1996-2001; you know, "avant-garde electronic music". Stockhausen, Cage, Riley, Reich, Ferarri, Schaeffer, Xenakis, you name it, I devoured it. I've been on a break ever since. This might just do the trick and get me back on the horse, though if you're a dilettante or newcomer, you couldn't ask for a better start.

The Raincoats... how did I ever let these ladies slip through my fingers? I recently won a copy of their Odyshape CD on ebay for a few pennies - that'll arrive sometime soon - though until it arrives I have their The Kitchen Tapes CD on ROIR to amuse myself with. This is a bit of an embarrassing confession, though I can probably thank Simon Reynolds for finally raising my brow to these lasses. Rip It Up and Start Again (see below) may possess a smorgasboard of faults I'm too lazy to go into detail with, though it did at least give me a checklist of Limey-rock previously ignored by moi which I've made it a mission to educate myself on. The Raincoats aren't really all that dissimilar to a lot of other UK post-punk, a combination of bloodless, anti-rock Britishness and earnest passion bound to light the fire of art students worldwide (kinda like they did, I guess), though their mixture of disparate influences not usually touched by their brethren makes them something to cherish. There's generic Slits-y dub, for sure, as well as your standard Miles/Ornette/Cherry swipes and faux-Africanisms which The Pop Group made a brief career of (not a bad thing, mind you), though it's that real sense of Englishness which appeals. Look, I'm new to the Raincoats, so bear with me, but listening to The Kitchen Tapes, the band doesn't sound a million miles removed from a Robert Wyatt/Steeleye Span/Henry Cow/Slapp Happy/Derek Bailey hybrid, a peculiar mix of the early '70s stuck in the early '80s. I guess we can all thank that Kurt guy for something now.

The Meat Puppets' Monsters LP was generally considered a turkey upon release and I know of many fans who hate it. Me, I've always loved the thing, and I can say that as a longterm fan who distinctly remembers buying it in an excited flush the day it arrived at Au-go-go (RIP) back in '89. Aaah.. memories. The beef? Well, I'll quote them, the dissers and nay-sayers: Monsters, first of all, sounds like a heavy metal album, and secondly, sounds like a sell-out. Huh? Compared to the clinical slickness of its predecessors, Mirage and Huevos (the former I've never dug), if anything, this shows the 'Pups returning to their grittier roots: clouds of muddy guitar distortion and songs which drop the funk in favour of "rock". Heavy metal? Sure, there's more than a few 'Sabbath (and even 'Zeppelin) riffs lurking in here, though you wouldn't mistake any of this for a Whitesnake platter (and if you did, you'd be a fucking idiot). I'd call Monsters an ace combo of psychedelic, heavy metal and country influences, and if that sounds perfectly dreadful, I'll simply direct you towards its two best songs, the last on both sides: side A's "The Void" (total early-'70s rifferama w/ phased-out vocals to match) and side B's "Like Being Alive", a droning ballad w/ intertwining acoustic/electric guitar parts not unlike their best songs on II. After much umming and aahing, I just (belatedly) bought myself the CD reissue on Rykodisc and am once again enjoying just what a great fucking album this is. Turkey? Not on your life!
Posted by Dave at 12:45 AM No comments: 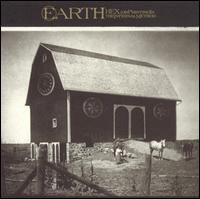 EARTH - Hex; Or Printing In The Infernal Method CD (Southern Lord)
Friends of mine - big Earth fans at that - have informed me they hate this record, Earth's first studio album since 1996's awesome Pentastar disc. I'll loosely quote the mumblings of one associate: It's really cool that Earth have tried something different; it would've been even better if they did something good. Ouch! What's all the grumbling for? This is a fantastic record, one w/ faults, for sure, but certainly nothing to moan about.
Earth, you say? You know 'em, we all know 'em. By some sort of weird accident of history, or, to be more generous, through years of unrewarded, messianic, artistic visionary-like pursuit, a good fifteen or so years after their recorded debut, they're the godfathers of a whole genre which is so damn hot right now I dare not touch it: let's call it "avant-metal" (AM). AM is doing the rounds worldwide these days; even the pencilneck geeks at The Wire write about it, I'm told (I haven't really read an issue "properly" for a good 3 years, so don't ask me).
So, to capitalize on this whole fandangled fad taking The Kids by storm, what do Earth do? In their never-ending pursuit to grab defeat from the jaws from victory, they take a 180-degree turn and rip out a disc w/ nary a hint of "doom", but instead one which sounds like it probably should've been released ten-odd years ago. You know, the Good Old Days, when frothing-at-the-mouth u-ground hepcats were blowing dole cheques on things like Morricone reissues, Dirty 3 LPs, Neil Young's Dead Man soundtrack and all those "atmospheric", "post-rock" albums you haven't played (and in the meantime sold) since the mid/late '90s. If you're now expecting a big slagging, you're wrong.
Hex... is by no means a milestone album, no matter who's behind the wheels, but after a good dozen listens, I'm convinced: a turkey this is not. It's Earth. It's different. It's good. Aiming for some kind of sunswept, "American Gothic" feel (just check the booklet and the glorious black and white photos within for confirmation of that), the approach here can be frustratingly minimal and slow-going. The downtuned guitar of yore is missing, only to be replaced by a mighty Duane Eddy-like TWANG. Add to the mix some banjo and lap/pedal steel and you have a genuine Americana recording which'll have the longhairs and doom-sayers screaming in horror. The comparisons have already been thrown around (by me, too, of course): Dead Man and Morricone's Spaghetti Western soundtracks, so I thought I'd throw a curveball into the mix: anyone ever buy an album by the post-Savage Republic outfit, Scenic? A dozen years back, I did. I think I still own it, though I can't be bothered looking. From memory, it sounded like this. That grand, expansive, desert-scorched sound. Earth even throw in a bit of near-Allman Brothers-style "classic rock" grandeur in the mix (especially in "An Insect Concerning Teeth"), crescending guitars to the fore, but there's still one track hinting at that patented Earth sound of a decade back: track seven, "Raiford (The Felon Wind)". It may just keep the naysayers happy for its seven-minute duration. Based on a sub-'Sabbath riff, it's the only song present with any kind of, dare I say, "heaviosity", and it's also the best track on the album. Down-tuned yet not in the least bit "metallic" in any traditional sense (the guitar texture is all fuzz w/ no real "sharpness" in its tone), this is as good as anything Earth has ever done.
Only real complaint: did this seriously take 9 years to put together? I doubt it; Dylan Carlson probably spent at least 5 of those missing years in a drugged haze. But still, there could've been more. Hex... is a mere 46 minutes long. That's a great length for a rock 'n' roll disc, but Earth are not rock 'n' roll. The Grand Statement, which is what this should have been (in the meantime knocking their thousands of imitators on their collective ass), requires a double-LP length: 65 minutes or more. Back to the drawing board, but for now, this is good enough.
Posted by Dave at 2:29 AM No comments:
Newer Posts Older Posts Home
Subscribe to: Posts (Atom)