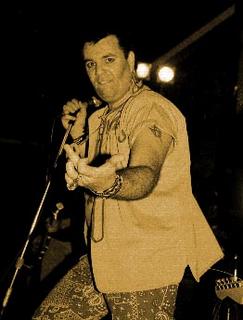 Hmmm... this barely-existent blog is beginning to read more like an obituary column than a musical "diary" of sorts these days. Anyway, more bad news from Texas: Randy "Biscuit" Turner, singer of the Big Boys and one of the most electrifying, charismatic and right-on-the-fucking-money frontmen of the original HC era, passed away just this past Thursday. You can read about it here. You can also read myself prattling on about the greatness of the Big Boys both here and here. One of the good guys. R.I.P.
Posted by Dave at 2:33 AM No comments: 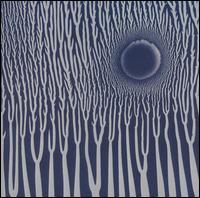 OK, the sad news is out of the way, so onto a few lightning-paced mini-reviews...

WIRE - Chairs Missing/154 CDs (EMI)
What brought on the sudden Wire fetish? Dunno, but it hit me like a bullet. I've heard these discs over at friends' places for years, though it's taken me until now to bother investing in them. The real winner is CM, their sophmore effort from 1978. Like a perfect combination of the more punkish material on Pink Flag, and a heavily Eno-damaged sound (ca. Here Come The Warm Jets) rolled into one, art-student wank-rock doesn't get much better than this (barring those 'Ubu records from the same period). I once read that Britpop nancy-boys Blur claimed Wire as a central influence on their music. I laughed. Not anymore. Is it just me, or does "I Am The Fly" sound remarkably like that "Girls Who Want Boys" (or whatever that song was called) track Blur hit it big with in the mid '90s? Un-fucking-canny.
My pal Robin just posted below re: 154... he's an argumentative man, so I'm not sure how to judge his take on this platter. Devil's advocate again? 154 is nowhere near as good as CM, though I'd still rate it as an essential purchase if one is to get a grasp on where Wire were heading with their sound. It's a touch too New Wave-damaged in parts for my pallate, veering awfully close to shonky Bryan Ferry territory in parts, though just when things sound like they're getting a touch too mincy, the band dirties the waters again with a bit of grime and extended excursions into non-lyrical drones. Have I mentioned the fact that I saw them play last year when they toured here and were in fact one of the top 5 best live bands I've ever seen? Well, I've done it now.

SUNNO))) - The Grimmrobe Demos CD (Southern Lord)
This is actually a reissue of an early, out-of-print album, but let's ponder this: SunnO))) could release a CD a month, sully their name in a year with a glut of drivel and destroy their illustrious career in no time, but they're smarter than that. How would that be possible? I can only assume because they make this drone/doom schtick looks so damn easy. Maybe it isn't... Really, couldn't the lads just line their instruments up in front of a few Marshalls, record the feedback, go out the back to smoke a bowl, re-enter the studio in 45 minutes, press stop on the recorder and herald it as another masterpiece to unleash on their slavish fanbase? They could, but thankfully they don't. The proof is in the pudding: they haven't released a turkey yet. There ain't much going on here: just a handful of songs with the trademark bong-rattling doom riffs interspersed throughout. Every five minutes or so the riff even changes a beat or two. Sounds boring, doesn't it? It ain't. On a particularly hungover day, this shit can clear a head like nothing else on earth.
Picture this: SunnO)))'s Greg Anderson shooting basketball hoops with Snoop Doggy Dogg. Sound crazy? It happened recently in Europe when they were both playing a big festival bill together. Crazy fuckin' world.

PHILIP JECK - Stoke; 7; Surf CDs (all Touch)
That's three CDs all in a row from Brit sound manipulator, Jeck. A good strike rate of quality, too, coz I've been spinning these suckas like a motherfucker the last month. The name may seem familiar to you; I've seen it littered throughout issues of The Wire mag the last decade, thus I'd never - until a month ago - given the guy a minute of my time. That was my loss; don't let it be yours. A "turntablist" musician, I guess it was that very description of his music which sent me into a coma every time his name was mentioned. Another goddamn limey cut-up artist for the New Wave of Electronica? Big fuggin' deal on a popsicle stick. How wrong I was. Jeck uses turntables, old records and assorted other sources to create a genuinely organic sound which resembles the best of Eno's ambient discs of the '70s, yet has enough tricks of his own to throw it into a more contemporary post-everything perspective. Not a dud note is hit; little subtleties are placed at just the right moments: notes, drones, analog samples. I thought I was over this kinda stuff by '99, but my interest has just been piqued once again. Nothing is gained from having your head in the sand, so like the great composer said (was it Charles Ives?): Use your goddamn ears like a man!

ENDNOTE: Not to make a fuss about it, but since some people asked, I will end with some good news: against all probable hope, the seemingly impossible happened last week... PayPal refunded the money - US$1400 - stolen out of my PayPal account about a month ago. Can you believe it? I barely can. I guess a persistent letter campaign can still count for something these days.
Posted by Dave at 3:41 AM No comments: 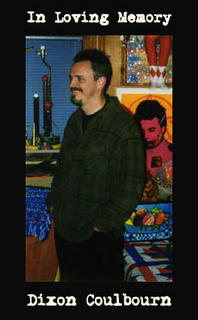 I was deeply saddened to hear today that my good buddy Dixon Edge Coulbourn from Austin, Texas, died on the weekend due to an unspecified (at this point in time) swimming accident. Dixon was one of the good guys. Maybe you've never heard of him, though he'll always be remembered by me for two things...

The first is the amazing web site he maintained for nearly a decade. Split into various offshoots, his site is a one-stop shop for any information you may require on such essential topics as The Pop Group (the best site dedicated to them anywhere on the web) and the early '80s punk rock scene in Austin (ditto). My praise is irrelevant. I can only assume you'll check it out and thus agree wholeheartedly.

More importantly, what I'll always remember about the guy is the week I spent with him and his partner at the time, Jenni, in mid 1999. The overwhelming heat and massive consumption of booze makes my memory hazy, though that week still stays in my mind as an awesome blur of sweltering mid-summer Texan humidity, seeing ST37, Don Walser and Daniel Johnston play live at various venues around the city, watching Nicholas Roeg's Walkabout (Dixon's all-time fave flick), scouring flea markets, being amazed by Dixon's remarkable capacity to write cheques for absolutely everything he bought (whether it was dinner or a newspaper), searching for Stacy Sutherland (13th Floor Elevators)'s grave in the middle of nowhere, visiting Jenni's family in the hills (and before you feel tempted to call me a lardass, I'll let you know I've lost 35 kg since that photo was taken...), checking out the sites where Dazed And Confused was filmed and... a whole lot more.

Dixon wrote to me just last month, excited by the fact that an old photo of his was to be on the front cover of an upcoming book detailing the history of Austin punk. A decade older than myself (that makes him 43), his death is a massive shock and hits me as a stark reminder that you just never know when your number's going to come up. Maybe this isn't the forum for this kind of talk, though it needs to be said. The work he did in his life, and his warm and giving personality, need to be paid tribute to somehow. He'll be missed.

Posted by Dave at 2:55 AM No comments:
Newer Posts Older Posts Home
Subscribe to: Posts (Atom)